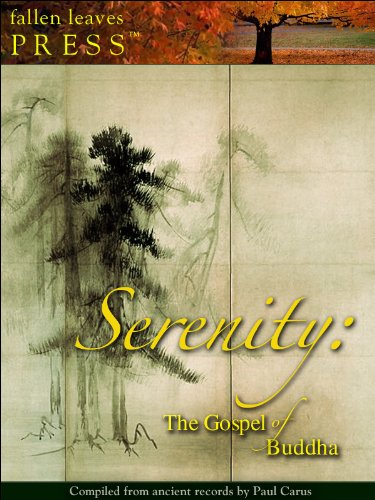 Serenity: The Gospel of Buddha

"The Gospel of Buddha" was compiled from ancient records by Paul Carus, a German-American author, editor, a student of comparative religion, and professor of philosophy.

Many passages of this book, and indeed the most important ones, are literally copied in translations from the original texts.

Some are rendered rather freely in order to make them intelligible to the present generation; others have been rearranged; and still others are abbreviated. Besides the three introductory and the three concluding chapters there are only a few purely original additions, which, however, are neither mere literary embellishments nor deviations from Buddhist doctrines. Additions and modifications contain nothing but ideas for which prototypes can be found somewhere among the traditions of Buddhism, and have been introduced as elucidations of its main principles.

The best evidence that this book characterizes the spirit of Buddhism correctly can be found in the welcome it has received throughout the entire Buddhist world. It has even been officially introduced in Buddhist schools and temples of Japan and Ceylon. Soon after the appearance of the first edition of 1894 the Right Rev. Shaku Soyen, a prominent Buddhist abbot of Kamakura, Japan, had a Japanese translation made by Teitaro Suzuki, and soon afterwards a Chinese version was made by Mr. O’Hara of Otzu, the talented editor of a Buddhist periodical, who in the meantime has unfortunately met with a premature death. In 1895 the Open Court Publishing Company brought out a German edition by E. F. L. Gauss, and Dr. L. de Milloue, the curator of the Musée Guimet, of Paris, followed with a French translation. Dr. Federigo Rodriguez has translated the book into Spanish and Felix Orth into Dutch.

The privilege of translating the book into Russian, Czechic, Italian, also into Siamese and other Oriental tongues has been granted, but of these latter the publishers have received only a version in the Urdu language, a dialect of eastern India.