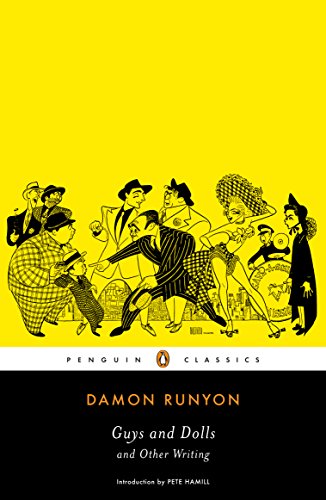 Guys and Dolls and Other Writings (Penguin Classics)

From Dave the Dude to Al Capone: a defining collection from the world of Damon Runyon

Damon Runyon grew up in the West, moved to New York City, and became one of the leading voices of American popular culture. From sports writing to short fiction, this unique collection offers an eclectic sampling of his extraordinary talent. Here are newspaper pieces, stories- including the last one he ever composed-poetry, and, of course, the Broadway tales for which he is chiefly remembered: Guys and Dolls, Blood Pressure, The Bloodhounds of Broadway, and others. Featuring works that are impossible to find elsewhere, and Runyon's signature eye for detail-particularly the sounds, smells, and tastes of New York-this book brings an American icon to a new generation of readers.

For more than seventy years, Penguin has been the leading publisher of classic literature in the English-speaking world. With more than 1,700 titles, Penguin Classics represents a global bookshelf of the best works throughout history and across genres and disciplines. Readers trust the series to provide authoritative texts enhanced by introductions and notes by distinguished scholars and contemporary authors, as well as up-to-date translations by award-winning translators.